The genetics of West of Englands

The genetics of the West of England goose are still not fully understood, although UK experts Chris and Mike Ashton have worked to explain some of it. It is probably due to the interaction of two genes, the sex-linked 'dilution' gene and the 'special spot' gene.

The sex-linked dilution gene is found in many breeds of white geese, including Embdens and Romans, along with the spot gene. The spot and dilution gene is what causes domestic geese to be white (the mechanism for white plumage in Chinese and African geese is different). Females of these white breeds have only one copy of the dilution gene, while males have two copies. In goslings, this often causes the females to be slightly darker in colour than their brothers (although the difference is much less clear than in true auto-sexing breeds like West of Englands). 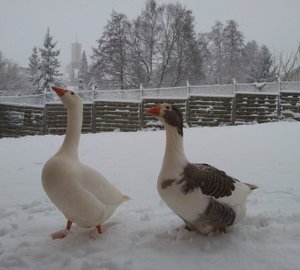 This effect can be used to sex goslings in Embdens and other white domestic breeds but is not 100% reliable, and once adult feathers grow in all the birds are white.

West of England geese and ganders both have a 'special spot' gene. This is hidden by a double copy of the dilution gene in ganders, but shows itself in female geese. While West of England ganders look like Embden ganders, it is likely that a cross with an Embden would not produce auto-sexing offspring.

West of England ganders usually have some traces of grey under the wings or on the thigh coverts to show their slightly different genetic makeup. While a West of England female goose looks a lot like a Pomeranian, Skane or greyback, she will usually have more white on her face and a less well-defined pattern - a very strongly marked bird with no white on the face should raise suspicions that the bird does not carry the dilution gene at all, and may in fact be a gander.

West of Englands can be crossed with Pilgrims to produce auto-sexing offspring in the first generation at least, and the Ashtons say that the Pilgrim colour is dominant. However, there is at least one reported example where this cross has produced saddleback female offspring, so the mechanics are not simple.